Free shipping on all orders over $100
Email hello@maximisetechnology.com.au 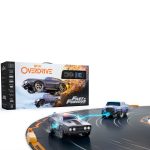 Anki aren’t just cars and tracks; these are robots programmed for battle and controlled with your mobile device. Battle the Toretto crew or race against friends and family as you complete missions, trigger massive explosions, and face off against intelligent opponents;